In Thailand, traditional rice wine is called Sato. Its very simple to make, has a relatively high alcohol content, and tastes great – what more could you want? The only difficulty in the process is obtaining the yeast balls to make it. These exist as two kinds – one for making Khao Mak (a fermented rice desert), and one for making Sato. They are not the same! Thai’s will tell you that you cannot make Sato from a Khao Mak yeast – well you can, but the taste will be different.

There is an extremely long thread on the homebrewtalk site where people have been posting the results of the rice wine using the Sato method, and also adding red yeast rice (RYR), traditionally used in chinese-style rice wine.

From what I can gather, most people are using yeast balls for Khao Mak, i.e. fermented rice desert yeast. These are readily available at Asian markets in packets. When you use these yeast balls, the resulting Sato will be sweeter, and take longer to brew. Sato made with Sato yeast balls is less sweet, has a burn on the throat when you drink it, and takes no more than one week to brew. But obtaining the yeast balls is quite difficult, as its not particularly legal! There are a few sanctioned makers of the yeast (which I was unable to find), but generally in country town markets, someone would be able to point you towards the local yeast maker. What is actually in the yeast ball, I could not find out – or the differences between the ingredients in the Sato and Khao Mak yeast balls.

Thai Sato is also only made with steamed sticky rice. This rice will hold its shape much better, resulting in less breakdown of the grains – which causes the wine to become cloudy and thick. A long brewing time and rice breakdown will result in a sour taste.

That said, in Kachin State, Burma, their rice wine is quite thick and pink (I guess they add red yeast rice?) and tastes just fine! I plan to do some research on my next trip there to document the different styles of rice wine making among the different ethnic groups. My Pa’o friend from Shan State was brought up on rice wine – dabbed on his lips as a baby to stop him crying……

Another point is that traditionally it is only made in winter time. This slows the fermentation slightly, giving more time for flavour to develop. Too short fermentation time will produce an alcohol burn and little taste. Water is also important. If you have access to good spring water, use it! Otherwise, adding mineral water at the last stage will also help in adding depth of flavour to the wine.

So here are the instructions to make Sato which I recieved from an Isaan friend – experts in rice wine making and drinking!

1. Wash a kilo of sticky rice (or sweet rice as it is sometimes packaged) until the water runs clear. Soak it for a couple of hours. If you don’t soak it, the inside of the grains will not cook evenly and you will either end up with undercooking or overcooking the rice.

2. Rinse it again until clear, and put in a steamer and steam for up to 20 minutes – until the grains are still firm but are clear in colour.

3. This step is optional: put a couple of tablespoons of food grade hydrated lime (also known as cal, and used in central America to nixtamalise corn) in a basin with water. Mix and leave to settle. Pour off the clear water into another basin, leaving the dregs behind, which you can discard. Put your cooked rice into a muslin cloth and tie it, then submerge it in the lime water for up to 5 minutes. Take out and let the excess water drain off. 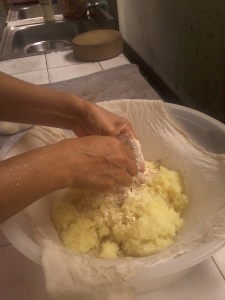 This process is to ensure the grains keep their shape during fermentation and don’t break down so easily. When you make Khao Mak, you need to do this step so each individual grain is separated and whole. For Sato, it is not important.

4. Crush 2 rice yeast balls (per one kilo of rice). Massage it into the cooled rice. Put into a jar with a cloth cover to allow gas to escape.

5. Keep for one week. On the last day (day 6/7), add about 500ml of mineral water and a few tablespoons of sugar (dissolve in water). Leave for another 12 hours or until the rice is floating. Strain off the lees, and bottle.

For this last stage, you could experiment with honey, sugar cane juice etc. My Isaan friend usually adds a bottle of Spy wine !!! extra alcohol kick perhaps? The sugar gives a last feed to the yeast, adds some fizz and balances out the heat of the Sato.